You are here: Home / learning resources / computer programming for kids

Hi guys, I’m very happy to have a guest blogger Andrew Mills, posting about a super way to teach computer programming for kids, Andrew’s going to talk about why it’s important for children to be able to code and is going to introduce a very clever and fun way to teach children about coding.  You can learn more about Andrew and his game ‘bits and bytes’ below the post.

Hope you all enjoy and find it useful

Bits and Bytes – Computer programming for Kids by Andrew Mills

With the new school year beginning many parents with primary school children will still be unaware of the changes to their children’s curriculum, this is despite it being a world’s first.

Some parents might argue that learning computer coding is irrelevant and question the sense of this change, but to quote Joanna Shields (the Chair of Tech City UK and a Non-Executive Director of the London Stock Exchange Group): “The way we work, live and experience the world is changing. Digital tools are helping everyone, not just engineers and computer scientists, to create exciting new experiences, products and services. If we want our kids to be more than just passive consumers – if we want them to become a generation of creators and makers – we need to teach them about the building blocks of today’s world.” 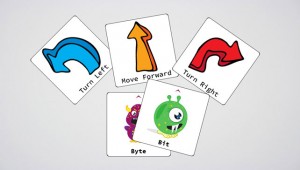 Two years ago, long before the government made it compulsory, I recognised the importance of teaching my children the fundamentals of computer coding. You see up to that point, despite being an IT professional, I had been blithely ignorant. I saw my children using tablets like a Samurai wielding a sword and would often comment to others on how great they were at computers. However, I realised the truth was my children were very good at navigating their way around an interface but that was the extent of it (they didn’t even know how a computer works). It was this realisation that made me decide to teach my children the fundamentals of computer coding.

All primary school children in England, regardless of whether they are in reception or year 6, will have to learn the fundamentals of computer coding through to actual coding.

I began by doing some research and uncovered a few apps and websites that taught the fundamentals. But these days a week doesn’t go by without the release of a new study telling us the importance of limiting children’s “screen time” to no more than two hours per day (this includes television viewing, computers, tablets, etc). I don’t know about you but the last thing I need to do is give my children another reason to look at a screen.

In the future not being able to understand computer code will be the equivalent of being illiterate today. No parent would want to disadvantage their children in this way.

A month or so later Bits & Bytes was born. A simple but fun card game that is inexpensive, yet teaches the fundamentals of computer coding and, best of all, required no computer knowledge on behalf of an adult or the children. 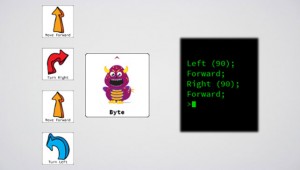 I went through several iterations using my own children and their friends as Guinea pigs. Once happy with it (which was after the government had announced computer coding would be part of the curriculum for all years of primary school) I approached the local primary school and asked if they would trial it with their KS1 children. They agreed and, much to my surprise, insisted on trialing it will all years. Nearly four months later I was invited in to the school to see the game being played. Suffice to say it was fantastic. The children were collaborating, creating, thinking and most importantly, having fun. It exceeded my expectations.

Since then I have been rushing around getting everything needed to be able to proceed to production and spreading the word on Bits & Bytes. The most common question asked of me, when I tell people what I am doing was “So what’s the big deal if my child can’t code?”

I find it easy to answer with an analogy – imagine somebody in 1950 saying “So what if my children can’t drive a car?”

And I have no doubt there were people who did say that back then, but less than 10 years later we know how stupid this question was. Computers are no different, apart from being more pervasive than cars.

A mere 15 years ago computers were used mostly as typewriters and the Internet consisted of simple websites and email, but now… they are everywhere. Today computers run cars, organise your social life, facilitate shopping, save lives and much more. And this is just the tip of the iceberg. We think they are everywhere now, imagine what the future will be like – the people who code will be designing and building software that impacts every facet of life. Nothing will escape the reach of software.

The choice we have as parents is – do we want our children to be part of this or do we want them to be passive – to just accept and have no influence?

Bits & Bytes is a card game that encourages creativity, appeals equally to boys and girls, inspires creativity and teaches children through play-based learning – which means they are having fun while learning. The goal of Bits and Bytes is simple. Each player guides their character (program) to their home by issuing instructions (turn right, turn left, move forward, turn around). At the same time they have to find jewels while avoiding walls, bugs and the dreaded Seepeeu (pronounced CPU). And all the time children are learning the fundamentals of computer coding. Everything that is required by the new curriculum and much more.

If you would like to find out more about Bits & Bytes you can visit the website at http://www.bitsandbytes.cards and if you want to help make Bits and Bytes a reality then their crowd funding page can be found at http://igg.me/at/bits.
[Tweet “#ComputerProgramming for Kids pic.twitter.com/owl63YDSxO #learning”]