So I was lucky enough to be able to go to the Star Wars Identities exhibition in the London O2 arena during the Christmas holidays.  I didn’t really know too much about it, obviously I expected Star Wars related exhibits (I wasn’t disappointed in that), but in equal meaure the exhibition was about the concept of identity itself.

Start here by watching my video review, this will help frame my feedback once you get an idea of how it looks and is laid out.

So first of all you could see that there are Star Wars exhibits aplenty, everything a real fan could appreciate

you won’t be disappointed by the selection available in this exhibition. 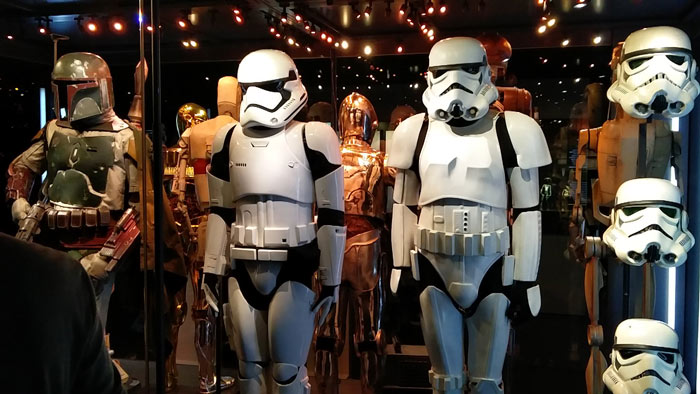 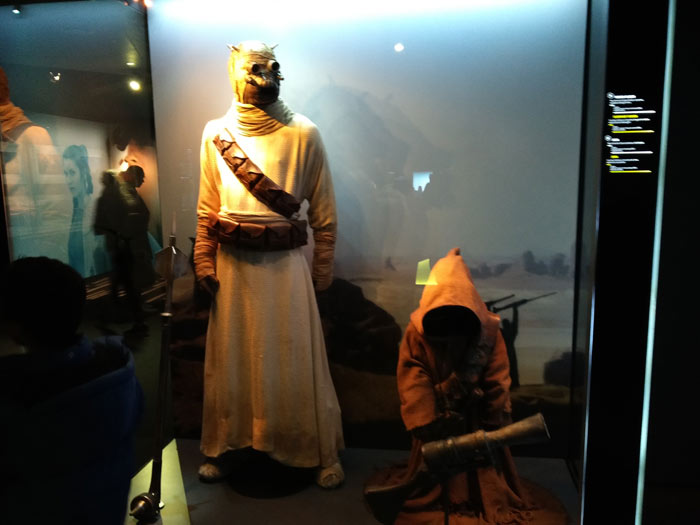 The way in which it’s all laid out is very well done, it’s not just put there, but you enter into zones each with a slighly dark area and the wonderful Star Wars musical score.

This is a real feast for the senses as you enter each zone with the character outfits and props.

The lighting, graphics and music made this a really well curated exhibition.

With a lot of these exhibitions the danger is that there are often so many people in one space that it’s hard to actually see or hear anything.  Star Wars Identities, hnadles this in a very skillful way, they have timed slots for you to enter in.  The group size that can enter in a single turn is also limited, there was about twenty people in the group I went in and I think the groups were staggered in half hour slots.

When you go up two escalators to get into the foyer, you are given a headset and transmitter, which you’ll be using through the tour to interact with the exhbits.  There’ll be a tour guide who will take you in and do a mini-induction to make sure your transmitter is working and show you how to use it.  It’s very straight forward, just walk up to any of the interactive displays and point your transmitter towards it, the audio will automatically start playing.

You’ll also be given a wrist band, this is for you to interact with the displays.  When you go into the first area make sure you use your wristband to login to the first terminal, it will ask you some questions about what your Star Wars preferences are, i.e. which planet you like, which characters you feel greatest affinity with etc.

Make sure you enter this data as there are many more points throughout the exhibition where you will tag your wristband to make decisions along the exhibition about your own identity.

Beacuase the groups are staggered the group size is not too overwhelming and you have enough time and space to enjoy the exhibits without having to worry about the next group coming in and making it too crowded.

What is the Concept of Star Wars Identities?

Underpinning the whole exhibition is the idea of identity and what it means to have an identity, how we associate our identity to the place we’re from, to the group we belong to, to the ideas and aspirations we subscribe to, to our belief and moral code.  As you walk through each stage of the exhibition you will be introduced to a different concept about identity. 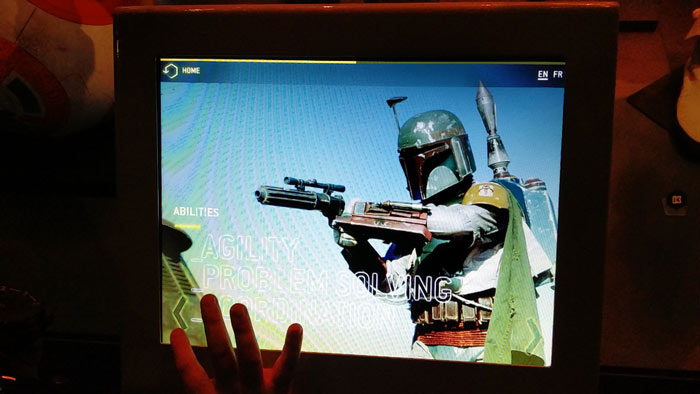 There are large displays that will play a three or four minute video explaining each of the concepts of identity.  The videos are really neatly made animations that explore the concept of identity thorugh Star Wars, specifically the differences between Anakin and Luke, there are scenes from the movies that help solidify the examples.

I found by wrapping it in Star Wars based examples that it was really engaging and effective way to present quite complex concepts about identity, especially to a young audience.

For the most part it’s quite spoiler free, but towards the second half there are a few scenes from the movie where key moments are shown, which I felt as a grown up may be a spolier, but my seven year old wouldn’t necessarily know were in the plot.

So I took a seven year old with me, who hadn’t seen the Star Wars movies yet.  I felt he was pretty engaged through out, the lighting, effects and music all added to an exciting ambiance that made the whole exhibition feel like a high end attraction.

I think kids will learn much about the ideas around identity as let’s face it, exploring these ideas could be quite esoterical, but given it’s skilfully framed using animation and scenes from the Star Wars movies really helps the audience understand and form their own conclusions of how different factors contribute to the idea of identity.

For younger children, I would think they would be more interested in the spectacle of all the Star Wars costumes and props.

But what about people who are not Star Wars fans?

Well I find people who aren’t into Star Wars to be quite an interesting group, as there’s a group who show no interest either way and then there’s the group of haters who hate everything about Star Wars.  Not unsurprisingly I did not see either of these groups on my visit. 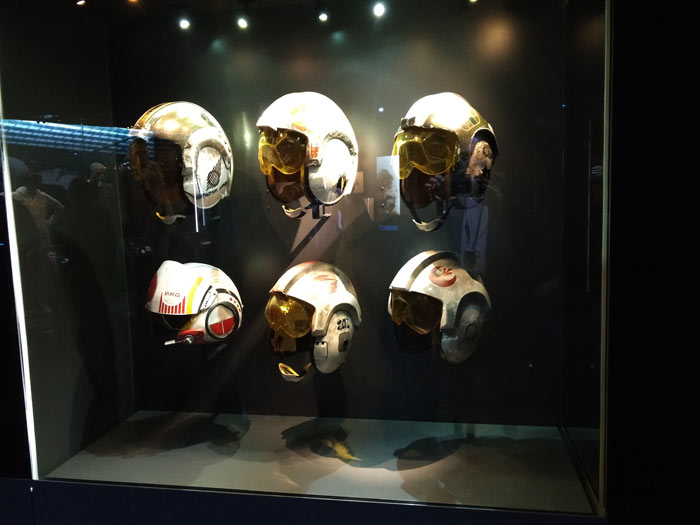 I’d like to think that they would still be impressed by the scale of the production and be interested in the concepts explained, I think it would be hard for anyone to not enjoy this regardless of whether they are ambivalent or actually have an outright dislike to Star Wars – yes there are people like this – it’s generally a very fun day out regardless.

Finding out your Star Wars Identities

So as you go through the exhibition you’ve been tagging your wristband at the various stations, answering questions and completing challenges.  All of these are Star Wars related, when you get to the end all the data that is gathered comes together to give you your very own unique Star Wars characters, along with what you value as important and groups that you identify with.  All the stations are set up really cleverly framing every question and challenge around situations and dilemas from the movies.

How to get there, kids facilities, ramps etc.

The Star Wars Identities exhibition is at the ultra modern London O2 arena which is very located by North Greenwich (Jubilee line), it’s very easy to find.  Being in the O2, there’s no shortage of places to eat and drink, there’s plenty of step free access.  The kids facilities are fine, I didn’t check out baby changing facilities, I don’t think this is really one for toddlers but I’m sure it being the O2 there’d be plenty of places for this.  Obviously toliet facilities and hand washing was very clean and to a very high standard.

All in all I’d recommend this, it was a good day out, allow yourself about an hour and a half to do this, bear in mind it can be very expensive when you exit via the gift shop.  And once you’re outside there’s so many restaurants and shops that will be so easy to tempt you to spending more money than you’d need to.

Tickets to the event can be booked direclty at the Star Wars Identities website, between £10 to £20, or a family ticket for £60 (for a family of four – under fives go free).

Have you been, are you going?  Let me know in the comments section below, what was your favourite part of the exhibition?  Tell me what Star Wars character you were.

Also be sure to use on of these social media sharing buttons below to tell your friends about the post, have a look around for more great kids days out and be sure to subscribe to my news letter.

Feel free to make yourself comfortable and look around the site.