So as you can see from the video the Hilton Dalaman is a beautiful hotel from the moment you arrive you’ll see just how well everything is laid out and the details to which they’ve gone to make a good first impression.  I’ve had this view that if a hotel isn’t impressive on the first impression than it’s not going to be that great from inside.

the Hilton Dalaman doesn’t disspoint – you can see here just how impressive it is from the moment you pull up to the lobby. 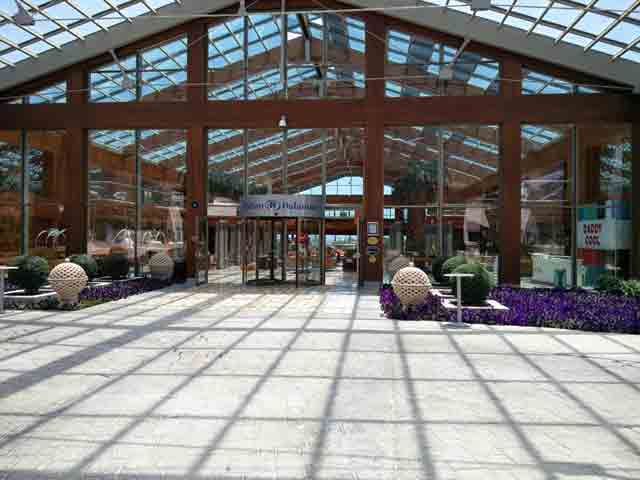 This is the view as you pull into the Hilton Dalaman 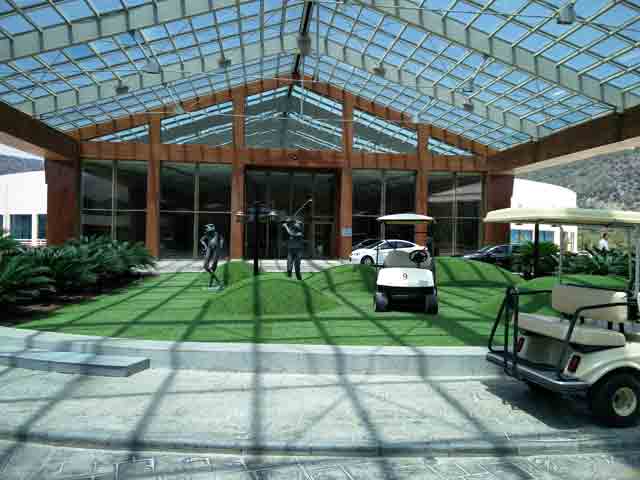 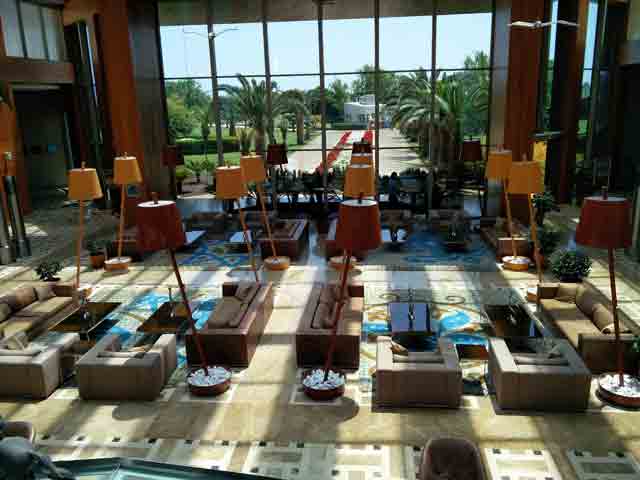 The staff I would say were excellent, they speak a variety of languages, getting around in English is just fine.  They were very helpful, attentive and knowledgable about the hotel and the activities.

Walking around the outside there’s so many pools, I counted seven on my stay, from indoor to outdoor, shallow kids pools, to huge waterslides – pool wise you won’t be disappointed, I swam everyday while I was out there. 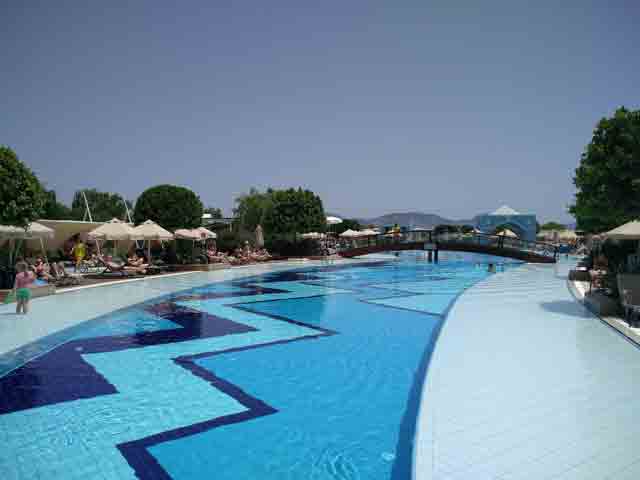 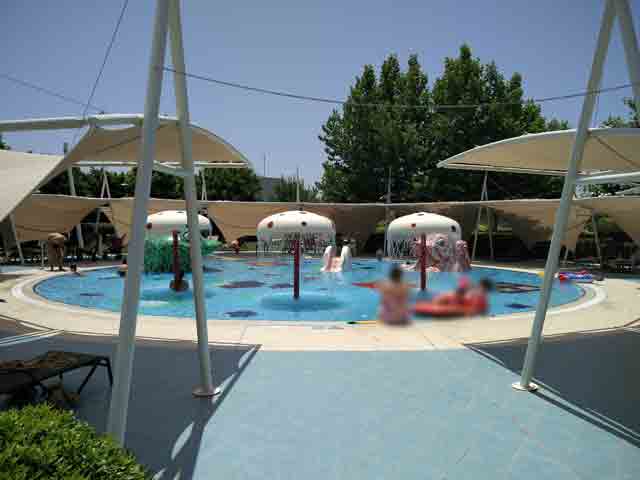 Whichever side of the hotel you are on – essentially there’s two wings either side of the main hotel building where your rooms will be – there is a pool right infront of your building – ours had a lovely little island in the centre (there’s a mini bridge to take you there) and was pretty huge – of course there’s deckchairs all around. 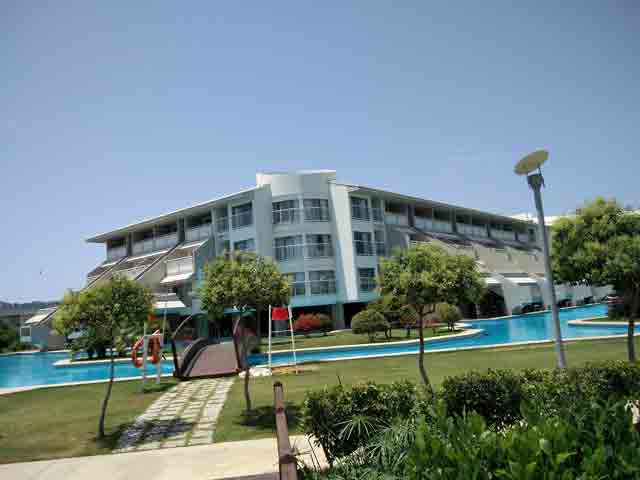 When you check in they will give you towel cards, just swap your card for a towel from any of the towel stations around the pools.  When you return your towel they give you back the towel card.

There were so many kid’s activities at the hotel, it has the best Kid’s Club that I’ve seen at any hotel I’ve stayed at (and I’ve been on a fair few) – the club runs three sessions, a morning session, an afternoon session and an evening session.  We never made it for the morning session – we went for the pool activities in the morning and Kid’s Club post lunch – they have a whole rosta of afternoon acitivies, it’s not a case of the kids have to entertain themselves – the staff (who by the way are excellent) put on activities for the kids, while we were there, there was

There’s snack and fruit time built in to the day – they make sure the kids have some food and drink.

The Kid’s Club is fully air conditioned so does really make a nice break for them if the sun is getting really intense.  The toilets were really clean, with low toilets and sinks so the kids can clean up easily.

You can either drop your child of there, you have to sign them in and out, the child gets a lanyard with their name, which you’ll have to sign out against the same number – it’s all very secure.  Or if you prefer you can stay in the club with them.

In the evening they have a kid’s disco party which is great fun – after dinner we went to the disco pretty much every night (I think it starts at 8.30), all the kids have great fun – you can join in too.

After the disco there’s another 3D cinema again if you have any energy left.

Outside of Kid’s Club, there is a place called the Breeze Bar, where they have

There’s loads of activities for grown ups too – I managed to do a few while I was out there too – well it’s your holiday too.

I know when you go on some holidays the evening entertainment can sometimes be a selection of staff prancing around to some pre-recorded music but at the Hilton Dalaman it’s not the case.

The shows here were actually brilliant!

Like there were properly professional shows, I don’t know if there’s touring companies that put on the shows, but there is proper entertainment here.

While I was there they had

It was all very impressive

The sand on the beach itself was very nice, as you get closer to the water it becomes a bit pebbly – but that’s the case with most beaches.

The water was nice and cool, it was really good for cooling down in.

There’s a life guard around and a rope barrier to the mark where not to swim past.

Food, drink and ice cream all around

There’s several restaurants that you can go to.  There’s dedicated

The food was just outstanding – truly the best food I’ve had anywhere.

There is free water, soft drinks and juices dotted around the pools, outside and around the beach areas so you can easily get hydrated wherever you are.

There is a wonderful coffee shop/bar/ice cream hut right in the centre of the pool area – pretty much after Kid’s Club we’d go in there to chill out before going to play games at the Breeze bar.

The rooms were brilliant too, very clean, spacious, the finish was a very high standard, the beds were very comfortable.  The bathrooms were very large and well laid out – really everything you’d expect for a Hilton.

Wifi is good all around the hotel, not that you want to be on your devices – just saying 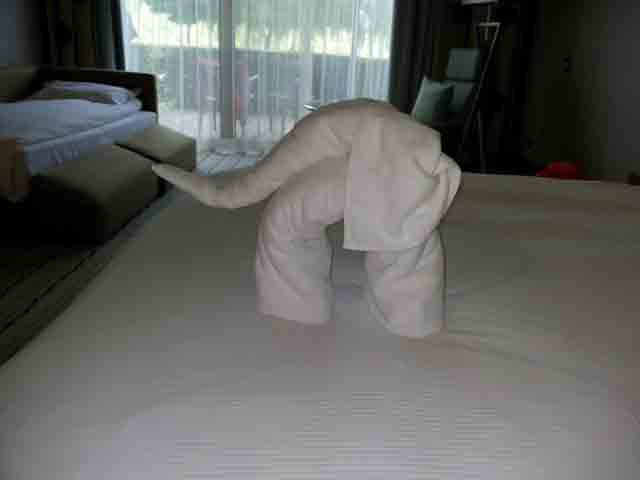 The Hilton Dalaman hotel is situated in Sarigerme which is about a 20km taxi ride from the airport – the ride took about half and hour and cost 30 euros, which is 75 Turkish Lira at the time we went.

If you are interested on the drive back to the airport, I made a little night movie of our drive back – night time driving movies are actually great at helping kids to sleep I’ve found (alhtough look out for the dog crossing the road at 5 mins in the video)

All in all, I throughly recommend the Hilton Dalaman hotel and resort, it certianly won me over, it was probably the best hotel I’ve stayed at, and I’ve stayed at quite a few.

Have you been, are you going?  Let me know in the comments section below and tell me about your stay.

Have a look around the site while you’re here too, let me know if you like the posts and what kind of content you’d like to see more of.