You are here: Home / children's behaviour / The second child syndrome – when you are at work all the time how to balance your time equally between multiple kids

I have to admit, I was totally unprepared for just how much difference there is between going from having one child to having two.  Leading up to the birth of my second child I did talk to a lot of people with two kids on how to deal with balancing whatever little time I had between two of them.

I used to think that the change in lifestyle between ‘not having any kids to having one’ was significantly bigger than ‘going from one to two children’.

I used to think that having the second would be a minor adjustment – after all we’ve now got the whole house set up in a child friendly manner, something that we did not have before, we’re adjusted in disjointed sleep patterns and having to organise ourself to military precision whenever going anywhere. 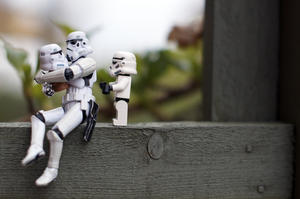 Going from one to two meant going from twenty percent spare time to two percent spare time.  And whereas with one you could come home from work and spend the evening focusing on the what that child needs at their particular stage, coming home to two means you’ve either got split your time equally between them or let one’s needs take precedence to the others alternating between them.  It’s not really an ideal balance, I spoke about trying to read to two children at the same time here http://www.workingparent.info/?p=12  but it goes beyond that and the wider the age gap between the children the more challenging it is to provide activities that stimulate their minds.Trying to get the children to bed is an equally challenging task, I got my older boy into the habit that I would cradle and sing to him every night till he fell asleep.  The problem being of course that when I wasn’t there it was difficult for him to settle and now that I am there I have to focus on getting the baby to sleep.  Depending upon the relative crankiness levels people are in I now try either sing to them both (settling the older child in his bed and cradling the baby) until the baby needs his bottle or alternatively have one quality story and one song with the older one before feeding the baby.

Good question, a couple of occasions I have worked though my lunch hour and left an hour early, giving myself an extra hour with them both was great, currently I’m getting around half an hour with them if I can leave work on time, in which they both need to be changed, teeth brushed, convince them it’s bedtime, even though they are excited when I get home, read and feed, it’s a frantic evening schedule, that is when I can get home on time.  That leaves no time for writing, having dinner with them (I have dinner, they have a second dinner) just basically talking to them and finding out what they did today.

The real gain is made in the mornings, from time to time I (try to) get up early get completely ready before they wake up.  When I do we have a great start to the day and spend some of the best quality time together in the morning having breakfast together and talking about the day ahead.  I go off to work knowing that I’ve given them an hour of my time, the house, the kids and the wife are set for the day.  I can’t always leave work early but by consistently aiming to get up before them has a big pay-off, though their getting uptime are somewhat unpredictable.

I’m entirely at their disposal at the weekends, a couple of times I have had to attend work or courses on the weekends but mostly everything is turned off, I’ve even recently started turning off the wifi over the weekends so I’m able to dedicate myself fully to them.  I wonder if there is an imbalance between stacking so much time up with them on the weekends and very little on the weekdays, is this is a good or bad thing or am I preparing them for the working world?As ever thank you for reading the post, I hope some of this was of use for you, please leave comments below on how you manage to split your time between your kids, especially during the weekdays, what the different challenges are depending upon the age gap between them, is it any more difficult if you have boys and girls?