You are here: Home / learning resources / 6 lessons that sports can teach us that school doesn’t

I was thinking that when I try to explain some important life lessons to my kids I tend to think in terms of sporting metaphors, like a four year old and one year old need sporting metaphors from the 90s and 00s.  The point being that active participation in sport can teach children so many lessons about life, lessons that they can only learn by doing themselves or even as many of us do vicariously through professional sports teams/players that will never appear on any national curriculum.

So what are these lessons that about life that sport can teach us? 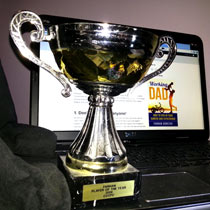 I used to play football quite a lot before having kids, in fact I actually won the player of the year trophy the year when my first was born.

There was one occasion in the boardroom someone was trying to shift blame onto me for their own neglect, I didn’t cave in, even when it was three on one, those physical confrontations on the football field helped me not to cave in.

I’ve put together a list of six examples from sports that teach something in particular to our kids.

Here goes, I’ve tried to be as neutral as possible and have based these off my favourite three sports, I’m sure there are lots of other examples of the same things and contradictory lists to this, it’s not meant to be an exhaustive list but it’s been great fun researching and compiling, please feel free to agree, disagree in the comments section below.

We all know Shane Warne is one of the greatest bowlers of all time, but there was a time when he wasn’t, there was a time when he was unheard of – that was his first ball in test cricket against England.  Bear in mind this is his first ever delivery in an Ashes test match against one of England’s most senior batsmen – was he afraid?  Maybe.  But did he go for it – well watch the video and see (this should also prove that the list is totally neutral too).

There are going to be times in life when someone, something or some situation will intimidate our kids – teaching them not to be afraid of these of anyone/anything or any situation will help them overcome any fear and have them believe in themselves – that they are the ones who will determine how far they go in life – no one else will determine that.

2. It doesn’t matter if no one has ever done it before – you can still do it!

No one had ever scored a hatrick in the premier league in under 5 mins before 1994 (yes it was that long ago), in fact hardly anyone had scored a hatrick against Aresnal’s defence, that defence has been cited as the best defence in the premiere league history.  But that didn’t stop Robbie Fowler from achieving this remarkable achievement.  In truth when you watch the footage below there wasn’t really much danger at all for the second and third goals, but Fowler’s belief and the fact that he wasn’t put off by any set of statistics telling him what he was about to achieve was impossible makes this a great lesson for kids.  There have been fast hatricks scored since then, but none of them against such an astute defence as this one.

Some of the modern day people who I look up to are those who created companies like Google, Apple, Pixar – no one had ever done these things before – teaching our kids not to accept limitations won’t necessarily make them create the next future super company/product but they will in their own ways create a better life for themselves.

3.  Don’t listen to what others say about you

no, not how my wife describes me, but these were all words used to describe Matt Le Tissier (so I do have something in common with him) – just as well as he never listened to so called expert’s opinions about himself.  Le Tissier defied all the critics who said he would never make it as a premiere league footballer – this is a lesson that we should be teaching our kids too.  There are always going to be people out there who will be telling them that they are no good, that they won’t achieve anything in life, that they can’t do it.

The truth is when someone says that you can’t do it, it’s because that person themselves couldn’t do it and they don’t want you to succeed – it was in a Will Smith movie so it must be true!

People often ask me who my favourite player in premiere league history is – actually no one has ever asked me that – but if they did I would say Matt Le Tissier is one of them and the reason is that despite all criticism from experts, pundits, newspaper columnists and alas even England managers (what a great job those England managers did too #sarcasm) he never stopped believing in himself.

Ask anyone who knows anything about football and they will agree Le Tiss was just went about his own business, believed in himself and never listened to the many detractors – surely in that is a great lesson we can teach our kids when the world starts to tell them they can’t achieve some goal of theirs (pun intended), they know best what they can do, if we can teach our kids to believe in themselves they too can achieve thier dreams.

This may be a bit contentious as nowadays we are moving to a time where the society is increasingly teaching us to look out for ourselves and certainly the messages sportspeople give out today of win at all costs is sadly being mirrored in society (does sport mirror society or is it the other way around?).  Realistically we can’t stop and help every single person we meet, nor should we aim to – we would never progress forwards if we helped every single person we met – but there are times when we should stop everything and help others who need it.

A goalkeeper falling and injuring himself would seem an obvious point to stop play – well not for the West Ham player who could clearly see the goalkeeper down and still decides to cross the ball in – luckily Paolo Di Canio did know to stop the game and insist the goalkeeper get help.  Ironically he could have headed it into the goal and play would have come to a natural stop but the lesson that he taught here about putting others first is quite a valuable one when used appropriately.

5. Do things at your own speed

Now there is a caveat here, when it comes to exams do it at the speed that the exam states, but learning in general is very hard to define what the right speed should be.  Different children will pick up different skillsets at a different pace.  Just because another child can read, write or even make a 147 sooner than yours is no need for alarm.  Here we see a classic example of this, in 1997 Ronnie O Sullivan made a 147 (which is the highest break score in snooker) in 5 mins and 20 secs.  To put that in context the first ever World Championship 147 was made (according to extensive research – thanks wiki.answers.com) in 1983 took over 30 mins.

When it comes to school and educational development there is a general arc that your child needs to follow.  Generally the exams will be at the end of a period of study, if you are falling behind know that there will be time to catch up and not put so much pressure on your child that he/she will cave in.  It’s the same with physical development, everyone needs to develop at their own pace.
If you generally give snooker a wide berth give this video a watch, it’s pure genius (basically the idea is to get a 147 you have to pot the black ball after every red ball, i.e. switch between red ball, black ball until all the reds have gone and then go through the colours in the right sequence – if you miss the break is over and your opponent takes to the table if there are still enough points available) and the speed at which he does it too has the referee running around the table to keep re-spotting the black ball is quite amusing too.

In 2005 was the single most remarkable comeback in sports history (don’t roll your eyes – use the comments section below to tell me why it wasn’t) Liverpool played AC Milan in the champions league final.  AC Milan were huge favourites to win the game.  Within 1 minute of the game AC Milan scored and took the lead, from there on AC Milan totally dominated the first half scoring two more times to make the half time score 3-0.

99% of teams would have just come out for the second half to play for some professional pride and try not to lose even more.  Not in this case Liverpool came back out and rallied the most amazing comeback in sporting history.

Herein is probably the most valuable lesson we can teach our kids – no one knows what slings and arrows of outrageous fortune will come our way, hopefully life will go well, but it would be naive to think that we or our children will never face adversity in one guise or another.  Teaching them to never give up, no matter how bleak the situation may be will be a valuable lesson that will make them strong enough to overcome any adversity.

As ever do share this post, tell me what you think, what other lessons can sport teach us, this list is not exhaustive your comments below will help fill in any other blanks.  Most of the sport has been UK based as that’s what I was exposed to, I imagine there are lots of other sporting achievements from everywhere, please use the comments section below to elaborate.

Thanks so much, while you’re here have a look around the rest of the site.