You are here: Home / job hunting / The perils of contracting

Much like final salary pensions, permanent jobs are becoming a thing of the past.  Nowadays many companies are switching from hiring staff positions to hiring contractors.  Why are they doing this?  Well for one even though a contractor should come in on a higher day rate than a staff position, the company

Putting the pros from a contractor’s point of view isn’t really relevant, as most of the jobs currently being offered today are for contract positions 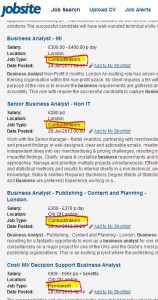 If you are going from a staff position to a contract role the main downside that you’ll see is the change in your job security.

To get rid of a contractor is so simple, I’ve had a contract where the termination clause was immediate, i.e. literally as I finished the last shot and had it signed off I was out the door.

It is daunting I went from a fairly cushy staff position to a contract and it was unnerving, I’ve been contracting for several years now and now I can’t imagine going to or wanting to go back to a staff position.

I’ve put together a list of things on why contracting is the future for you, clearly it seems to be the way companies are going, but for you the benefits you can gain for yourself of contracting should outweigh what the staff position gives you.

i. there is no such thing as a permanent job any more

Get this out of your head, even permanent staff can and are let go, no one’s job is hundred percent safe.  Any company can restructure and shed staff, sure the permanent staff may get three, six or even twelve months severance package but they are not immune to being cut.  Not to mention that anyone can get sacked, granted it’s more difficult to sack a permanent staff member than a contractor but if a staff member is under performing they will be flagged up in a review, whereas the contractor could just see out the remainder of the contract.

ii.  There’s no reason for you to hang in there for a job that you don’t love

Too many people are doing jobs that they hate, why?  For security.

You as the contractor don’t need to do this, just see out the end of the contract and be on your way.  If you do like the role then stay at the job, but if you’re getting bored know that you can end the contract early, it’s not as if you were going to stay there forever.

iii.  You get to expand your network much more than any staff member would

The fact that you could go between companies in the same industry means you will build up a professional network of qualified people.  Some of these people will move companies and when they do you have a first person connection in a new company where you wouldn’t have had before.

There’s no exact science to how much more you should earn than the staff member sitting next to you, some would say fifty percent more, others would say higher.  Know it’s okay to earn more money for doing the same job, after all that full time employee has a whole host of benefits that you aren’t entitled to.

There are of course a number of downsides too

Apart from not having any benefits and being able to be readily replaced, being a contractor means that you will be brought in when the project is up against it, this will mean you can’t idle away at the start of the project like an FTE could, you’ll be brought in when the project is behind schedule.  Also you’ll spend a significant amount of time job hunting, quite easily you could spend the last few weeks of your contract looking for a new one.

This just seems to be the current trend, the way that companies are hiring at the moment.  It may change as we exit the credit crunch, but for now try to make the most of it.

So what does this mean for you and your kids?

Well your routine is out of the window when you’re contracting, one contract may mean getting home at six every night and then the next contract a few weeks later may see you getting in at nine every night.  You may be home one week and travelling abroad the next.  Contracting is very turbulent and it will impact upon your family life.

When my first child was born I was in a full time job and had two weeks paid paternity leave.  When my second boy was born I took two days off (unpaid) and then had to get back to work on the Olympics presentations.

If you’re having a child then having a staff job definitely pays off.

However contracting does give you that flexibility at the end of a contract to take off as much time as you like and can afford, if you want to have a five week holiday you don’t need to clear it with anyone.  If your skills are in demand you could schedule future contracts to coincide with project start dates and take off time in-between that fits around your schedule.  If you are contracting put some money aside for days off and sick days, put some money aside to put into a pension and healthcare if you need to, after all those are catered for you should aim to be in at least a good a position as your FTE counterpart.  Over the year you will probably spend less time with your kids than an FTE though, but make up for that by putting money aside and taking breaks.

I’m sure it’s different from industry to industry, love to your thoughts and experiences on the subject are.  Thanks for reading.  Farhan.